There are two stable data which anyone has to have, understand and know are true in order to obtain results in handling the person connected to suppressives.

1. That all illness in greater or lesser degree and all foul-ups stem directly and only from a PTS condition.

2. That getting rid of the condition requires three basic actions: (A) Discover; (B) Handle or (C) Disconnect.

Persons called upon to handle PTS people can do so very easily, far more easily than they believe. Their basic stumbling block is thinking that there are exceptions or that there is other technology or that the two above data have modifiers or are not sweeping. The moment a person who is trying to handle PTSes gets persuaded there are other conditions or reasons or technology, he is at once lost and will lose the game and not obtain results. And this is very too bad because it is not difficult and the results are there to be obtained.

A PTS person is rarely psychotic. But all psychotics are PTS if only to themselves. A PTS person may be in a state of deficiency or pathology (an unhealthy condition caused by a disease) which prevents a ready recovery, but at the same time he will not fully recover unless the PTS condition is also handled. For he became prone to deficiency or pathological illness because he was PTS. And unless the condition is relieved, no matter what medication or nutrition he may be given, he might not recover and certainly will not recover permanently. This seems to indicate that there are “other illnesses or reasons for illness besides being PTS.” To be sure, there are deficiencies and illnesses just as there are accidents and injuries. But strangely enough, the person himself precipitates them (causes them to happen) because being PTS predisposes him (makes him susceptible) to them.

In a more garbled way, the medicos and nutritionists are always talking about “stress” causing illness. Lacking full technology on the subject as contained in Scientology, they yet have an inkling that this is so because they see it is somehow true. They cannot handle it. Yet they recognize it, and they state that it is a senior situation to various illnesses and accidents. Well, Scientology has the technology of this in more ways than one.

What is this thing called “stress”? It is more than the medico defines it-he usually says it comes from operational or physical shock and in this he has too limited a view.

A person under stress is actually under a suppression in one or more areas or aspects of his life.

If that suppression is located and the person handles or disconnects, the condition diminishes. If he also receives Scientology processes which address suppression of the individual and if all such areas of suppression are thus handled, the person would recover from anything caused by “stress.”

Usually, the person has insufficient understanding of life or any area of it to grasp his own situation. He is confused. He believes all his illnesses are true because they occur in such heavy books!

At some time he was predisposed to illness or accidents. When a serious suppression then occurred, he suffered a precipitation or occurrence of the accident or illness, and then with a series of repeated similar suppressions, the illness or tendency to accidents became prolonged or chronic.

To say then that a person is PTS to his current environment would be very limited as a diagnosis. If he continues to do or be something to which the suppressive person or group objected, he may become or continue to be ill or have accidents.

Actually, the problem of PTS is not very complicated. Once you have grasped the two data first given, the rest of it becomes simply an analysis of how they apply to this particular person.

A PTS person can be markedly helped in three ways:

a. Gaining an understanding of the technology of the condition

b. Discovering to what or to whom he is PTS

Someone with the wish or duty to find and handle PTSes has an additional prior step: he must know how to recognize a PTS and how to handle them when recognized. Thus, it is rather a waste of time to engage in this hunt unless one has thoroughly studied the material on suppressives and PTSes and grasps it without misunderstanding the words or terms used. In other words, the first step of the person is to get a grasp of the subject and its technology. This is not difficult to do.

With this step done, a person has no real trouble recognizing PTS people and can have success in handling them which is very gratifying and rewarding.

Let us consider the easiest level of approach:

i. Give the person the simpler materials on the subject and let him study them so that he knows the elements like “PTS” and “suppressive.” He may just come to realize the source of his difficulties right there and be much better. It has happened.

ii. Have him discuss the illness or accident or condition, with-out much prodding or probing, that he thinks now may be the result of suppression. He will usually tell you it is right here and now or was a short time ago and will be all set to explain it (without any relief) as stemming from his current environment or a recent one. If you let it go at that, he would simply be a bit unhappy and not get well as he is discussing usually a recent disturbing experience that has a lot of earlier similar experiences below it.

iii. Ask when he recalls first having that illness or having such accidents. He will at once begin to roll this back and realize that it has happened before. He will get back to some early this-lifetime point usually.

iv. Now ask him who it was. He will usually tell you promptly. And, as you are not trying to do more than release him from the restimulation that occurred, you don’t probe any further.

v. You will usually find that he has named a person to whom he is still connected! So you ask him whether he wants to handle or disconnect. Now, as the sparks will really fly in his life if he dramatically disconnects and if he can’t see how he can, you persuade him to begin to handle with a gradual approach. This may consist of imposing some slight discipline on him, such as requiring him to actually answer his mail or write the person a pleasant good roads, good weather (calm, warm, friendly) note or to realistically look at how he turned them from being affectionate to being indifferent, disliking or hateful. In short, what is required in the handling is an easy, gradual approach. All you are trying to do is MOVE THE PTS PERSON FROM BEING THE EFFECT OF SUPPRESSION OVER TO BEING IN A POSITION OF SLIGHT GENTLE CAUSE OVER IT.

vi. Check with the person again, if he is handling, and coach him along, always at a gentle good-roads-and-good-weather level.

That is a simple handling. You can get complexities such as a person being PTS to an unknown person in his immediate vicinity that he may have to find before he can handle or disconnect. You can find people who can’t remember more than a few years back. But simple handling ends when it looks pretty complex. When you run into such complexity, it can be handled by more advanced procedures in Scientology. 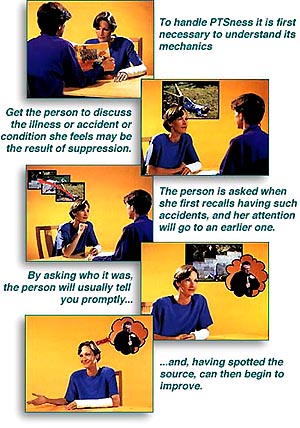 But this simple handling will get you quite a few stars in your crown. You will be amazed to find that while some of them don’t instantly recover, medication, vitamins, minerals will now work when before they wouldn’t. You may also get some instant recoveries but realize that if they don’t, you have not failed.

By doing the PTS handling steps laid out in this section, you have made an entrance and you have stirred things up and gotten the PTS person more aware and just that way you will find he is in a more causative position.

His illness or proneness to accidents may not be slight. You may succeed only to the point where he now has a chance, by nutrition, vitamins, minerals, medication, treatment, and above all, Scientology processing, of getting well. Unless you jogged this condition, he had no chance at all: for becoming PTS is the first thing that happened to him on the subject of illness or accidents.

So do not underestimate what you can do for a PTS. And don’t sell PTS technology short or neglect it. And don’t push off, or even worse tolerate, PTS conditions in people.

You can do something about it.

And so can they.