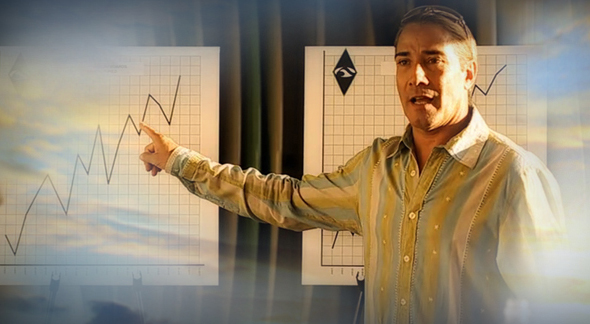 For an individual, group or organization to achieve an intended goal requires knowledge of certain principles on the subject of organization.

When we look at organization in its most simple form, when we seek certain key actions or circumstances that make organization work, when we need a very simple, very vital rundown to teach people that will produce results, we find only a few points we need to stress.

The purpose of organization is TO MAKE PLANNING BECOME ACTUALITY.

An actuality is a state or thing that exists in reality.

Organization is not just a fancy, complex system, done for its own sake. That is bureaucracy at its worst. Graphs for the sake of graphs, rules for the sake of rules, only add up to failures.

The only virtue (not always a bad one) of a complex, unwieldy, meaningless bureaucratic structure is that it provides jobs for the friends of those in control. If it does not also bring about burdensome taxation and threatened bankruptcy by reason of the expense of maintaining it, and if it does not saddle a people or production employees with militant (aggressive) inspections and needless control, organization for the sake of providing employment is not evil but beyond providing employment is useless, and only when given too much authority is it destructive.

The kings of France and other lands used to invent titles and duties to give activity to the hordes of noble hangers-on to keep them at court, under surveillance, and out of mischief out in the provinces where they might stir up their own people. “Keeper of the Footstools,” “Holder of the Royal Nightgown” and other such titles were fought for, bought, sold and held with ferocity.

Status-seeking, the effort to become more important and have a personal reason for being and for being respected, gets in the road of honest efforts to effectively organize in order to get something done, in order to make something economically sound.

Organization for its own sake, in actual practice, usually erects a monster that becomes so hard to live with that it becomes overthrown. Production losses, high taxes, irritating or fearsome interference with the people or actual producers invites and accomplishes bankruptcy or revolt, usually both, even in commercial companies.

Therefore to be meaningful, useful and lasting, an organization (corporation, company, business, group, etc.) has to fit into the definition above:

In companies and countries there is no real lack of dreaming. All but the most depraved (morally bad or corrupt) heads of companies or states wish to see specific or general improvement. This is also true of their executives and, as it forms the basis of nearly all revolts, it is certainly true of workers. From top to bottom, then, there is, in the large majority, a desire for improvement.

More food, more profit, more pay, more facilities and, in general, more and better of whatever they believe is good or beneficial. This also includes less of what they generally consider to be bad.

But only to have a program is to have only a dream. In companies, in political parties, useful programs are very numerous. They suffer only from a lack of execution.

All sorts of variations of program failure occur. The program is too big. It is not generally considered desirable. It is not needed at all. It would benefit only a few. Such are surface reasons. The basic reason is lack of organization know-how.

Any program, too ambitious, partially acceptable, needed or not needed, could be put into effect if properly organized.

The five-year plans of some nations which were in vogue were almost all very valuable and almost all fell short of their objectives. The reason was not that they were unreal, too ambitious or generally unacceptable. The reason for any such failure was and is lack of organization.

It is not man’s dreams that fail him. It is the lack of know-how required to bring those dreams into actuality.

1. To perpetuate (prolong the existence of) an existing company, culture or society,

Given a base on which to operate – which is to say land, people, equipment and a culture – one needs a good administrative pattern of some sort just to maintain it.

Thus (1) and (2) above become (2) only. The plan is “to continue the existing entity.” No company or country continues unless one continues to put it there. Thus an administrative system of some sort, no matter how crude, is necessary to perpetuate any group or any subdivision of a group. Even a king or headman or manager who has no other supporting system to whom one can bring disputes about land or water or pay is an administrative system. The foreman of a labor gang that only loads trucks has an astonishingly complex administrative system at work.

When a whole system of administration moves out or gets lost or forgotten, collapse occurs unless a new or substitute system is at once moved into place.

Changing the head of a department, much less a general manager and much, much less a ruler, can destroy a portion or the whole since the old system, unknown, disregarded or forgotten, may cease and no new system which is understood is put in its place. Frequent transfers within a company or country can keep the entire group small, disordered and confused, since such transfers destroy what little administration there might have been.

Thus, if administrative shifts or errors or lack can collapse any type of group, it is vital to know the basic subject of organization.

Even if the group is at effect – which is to say originates nothing but only defends in the face of threatened disaster – it still must plan. And if it plans, somehow it must get the plan executed or done. Even a simple situation of an attacked fortress has to be defended by planning and doing the plan, no matter how crude. The order “Repel the invader who is storming the south wall” is the result of observation and planning no matter how brief or unthorough. Getting the south wall defended occurs by some system of administration even if it only consists of sergeants hearing the order and pushing their men to the south wall.

A company with heavy debts has to plan even if it is just to stall off creditors. And some administrative system has to exist even to do only that.

The terrible dismay of a young leader who plans a great and powerful new era only to find himself dealing with old and weak faults is attributable not to his “foolish ambition” or “lack of reality” but to his lack of organizational know-how.

Even elected presidents or prime ministers of democracies are victims of such terrible dismay. They do not, as is routinely asserted, “go back on their campaign promises” or “betray the people.” They, as well as their members of parliament, simply lack the rudiments (fundamentals) of organizational know-how. They cannot put their campaign promises into effect, not because they are too high-flown (sounding grand or important) but because they are politicians, not administrators.

To some men it seems enough to dream a wonderful dream. Just because they dreamed it they feel it should now take place. They become very provoked when it does not occur.

Whole nations, to say nothing of commercial firms or societies or groups, have spent decades in floundering turmoil because the basic dreams and plans were never brought to fruition (successful completion).

Whether one is planning for the affluence of the Appalachian Mountains or a new loading shed closer to the highway, the gap between the plan and the actuality will be found to be lack of administrative know-how.

Technical ignorance, finance, even lack of authority and unreal planning itself are none of them true barriers between planning and actuality.