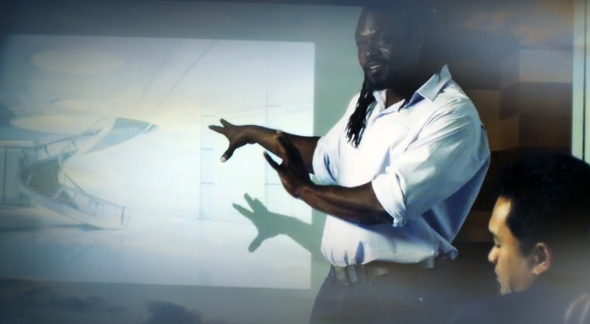 Let us now more closely examine several components of communication by looking at two life units, one of them “A” and the other “B.” “A” and “B” are terminals – by terminal we mean a point that receives, relays and sends communication.

First there is “A’s” intention. This, at “B” becomes attention, and for a true communication to take place, a duplication at “B” must take place of what emanated from “A”.

Now, there is another factor which is very important. This is the factor of duplication. We could express this as reality, or we could express it as agreement. The degree of agreement reached between “A” and “B” in this communication cycle becomes their reality, and this is accomplished mechanically by duplication. In other words, the degree of reality reached in this communication cycle depends upon the amount of duplication. “B” as effect, must to some degree duplicate what emanated from “A” as cause, in order for the first part of the cycle to take effect.

Then “A”, now as effect, must duplicate what emanated from “B” for the communication to be concluded. If this is done there is no detrimental consequence.

If this duplication does not take place at “B” and then at “A” we get what amounts to an unfinished cycle of action. If, for instance, “B” did not vaguely duplicate what emanated from “A”, the first part of the cycle of communication was not achieved, and a great deal of randomity (unpredicted motion), explanation, argument might result. Then if “A” did not duplicate what emanated from “B” when “B” was cause on the second cycle, again an uncompleted cycle of communication occurred with consequent unreality. Now naturally, if we cut down reality, we will cut down affinity – the feeling of love or liking for something or someone. So, where duplication is absent, affinity is seen to drop.

An unfinished cycle of communication generates what might be called answer hunger. An individual who is waiting for a signal that his communication has been received is prone to accept any inflow. When an individual has, for a very long period of time, consistently waited for answers which did not arrive, any sort of answer from anywhere will be pulled in to him, by him, as an effort to remedy his scarcity for answers.

Uncompleted cycles of communication bring about a scarcity of answers. It does not much matter what the answers were or would be as long as they vaguely approximate the subject at hand. It does matter when some entirely unlooked-for answer is given, as in compulsive or obsessive communication, or when no answer is given at all.

Communication itself is detrimental only when the emanating communication at cause was sudden and non sequitur (illogical) to the environment. Here we have violations of attention and intention.

The factor of interest also enters here but is far less important. Nevertheless, it explains a great deal about human behavior. “A” has the intention of interesting “B”. “B”, to be talked to, becomes interesting.

Similarly “B”, when he emanates a communication, is interested and “A” is interesting.

Of some greater importance is the fact that the intention to be received on the part of “A” places upon “A” the necessity of being duplicatable.

If “A” cannot be duplicatable in any degree, then of course his communication will not be received at “B”, for “B”, unable to duplicate “A”, cannot receive the communication.

Basically, all things are considerations. We consider that things are, and so they are. The idea is always senior to the mechanics of energy, space, time, mass. It would be possible to have entirely different ideas about communication than these. However, these happen to be the ideas of communication which are in common in this universe, and which are utilized by the life units of this universe.

Let us take the example of a modernistic writer who insists that the first three letters of every word should be dropped or that no sentence should be finished. He will not attain agreement among his readers.

There is a continuous action of natural selection, one might say, which weeds out strange or peculiar communication ideas. People, to be in communication, adhere to the basic rules as given here, and when anyone tries to depart too widely from these rules, they simply do not duplicate him and so, in effect, he goes out of communication.

Where we get these conditions in an individual or a group we have sane people.

Where an unwillingness to send or receive communications occurs, where people obsessively or compulsively send communications without direction and without trying to be duplicatable, where individuals in receipt of communications stand silent and do not acknowledge or reply, we have factors of irrationality.